The Ranch Patty Melt: A Classic with a Twist 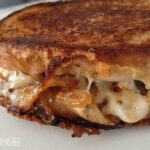 Organize your ingredients and cooking instruments. You’ll need a medium bowl and three skillets (one small, one medium and one large) to prepare the onions, burgers and the completed patty melts.

In a medium bowl, mix together ground turkey, Worcestershire sauce, salt and pepper. Form into 4 oval-shaped patties, similar to the size of the rye bread slices. Put patties on a plate; set aside.

In a small skillet, melt 2 tablespoons butter over medium-low heat. Toss in the onions and cook for 25 to 30 minutes. Stir occasionally. Onions are done when they are golden brown and soft. Remove from heat and set aside.

In a large skillet, melt 2 tablespoons butter over medium heat. Cook the turkey burger patties on both sides, until done in the middle and browned on the outside. Set aside.

In the medium skillet, melt 2 tablespoons butter over medium heat. Assemble the patty melts first with a slice of rye bread topped with a slice of Swiss cheese. Add the turkey burger patty and one-fourth of the cooked onions. Cover the patty with 2 tablespoons ranch dressing followed by another slice of Swiss cheese. Top with another slice of rye bread, and grill the sandwiches until golden brown.

Repeat until all 4 sandwiches are in the skillet. When browned on one side, add the remaining 2 tablespoons butter in the skillet. Carefully flip each sandwich over, and cook until golden brown, crisp and cheese has melted.

Cut in half and serve immediately. Serve with additional ranch dressing on the side for dipping.